jeremy has an ultra efficient outdoor style. stays low on the bike...doesn't seem to fight the chop like other dudes. it's a skill you don't see.

eli, love how he stays way hi and over the front of the bike...looks sick....about as sick as that beating he laid down. this could be a long summer for dung whos bike sucked. you could actually see him shaking his head on that uphill lefty after mashing thru some chop.

weston...i will never understand how he got so fast after being so slow. he looks sketcht but is so strong he just manages it.

marv is a sick talent.

one thumb will looks fast...but he'll fade out of that front running pace as the season goes on.

ac/webb....sucks to see them hit the dirt. ac will win motos.

i love how el hombre just love to stick his dick into dudes. he's a fucker...a fast one.

KR is one tough sob.

lil alex martin is a real grinder...like pieck, man has he progressed....of course, working with o'show is cool.

the fade of bisceglia after the holeshot was down right embarrassing. dude needs to chill under that initial craziness of the 250 opening laps.


the winner....hangtown!!! they built a bitch of a track. rough, rutty, big hits, new ideas....and it seperated the men from the boys. 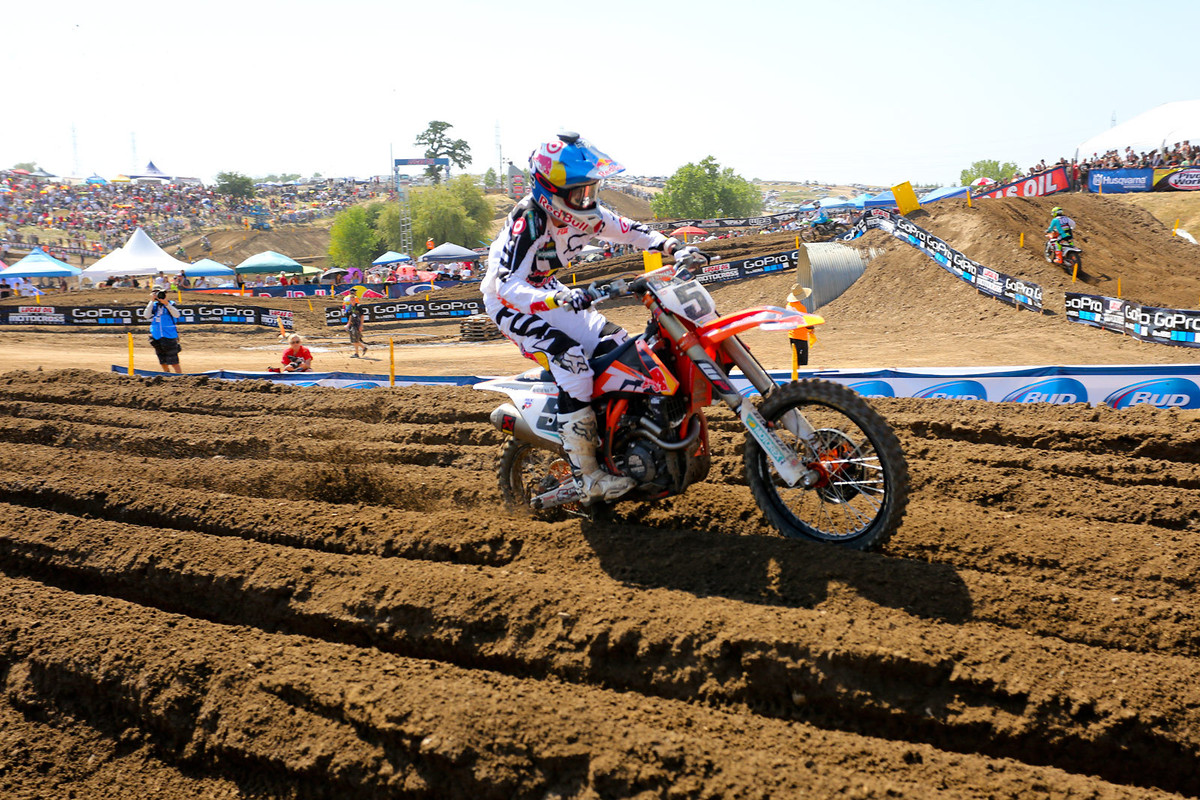 Man how about Metcalfe that guy is gonna be a handful come the 31st! Leading Edge MX-2 rider this year Cole Martinez 28 DNF?

Yes on point with many things! Some of these 'Lifer' venues Hangtown, Washougal, Unadilla etc have taken some heat in recent years over the fact that the soil has become 'Burntout' Hangtown did an amazing job with everything!

Even though they did not make the mains Brock Leitner Canadian National #51 was ninth in the consolation race. He had been running 2nd, nice work Brock.

Also Keylan Mestan jacked his ankle a bit (sprane) in his own words got 12th in consolation. Sylvain LeGad 7th. nice work boys ant thanks to Brock & Keylan for picking up their phones

HAMMERTIME wrote:porn must have a brutal concussion....what a horrible slam.

I think Roczen's title defense is F'd unfortunatley. Too bad. Hope Canard can come back and challenge for wins.

What word can describe what Tomac did there? Decimated, destroyed, dominated...
Top

HAMMERTIME wrote:porn must have a brutal concussion....what a horrible slam.

I can't even find the race. Grrrrr.

Great thoughts by hammer ... Hard to believe Aldredge sucked so bad in SX and has done very good so far in MX (counting last year)...

Super pumped for Alex Martin... and Weston Peick...! Peick is pushing very hard in the 450 class while it seems like a lot of guys are just riding around.... I know they're riding around at an incredible speed but how the hell can you be 6+ seconds a lap slower than Tomac? Why is it that most kids getting A rides in the 250 are just top 10 guys nowadays? Is the talent pool really getting that much smaller? (insert bike sales numbers here)

Reed can do whatever he wants... He's proven he can win once in a while. He's not a contender anymore but if racing his dirt bike makes him happy then we should all be happy for him.

Why does Mr. Baggett have more hair than Blake?

Zach Bell crashed in the lap lap of moto 1. Sucked in moto 2. My Fantasy moto memory says he's crashed in 95% of the races he entered... His employers are murderers... The kid's never gonna win anything. I bet he's barely making a living. Please get him out while he's still alive.

Nelson can go fast but he's missing something... (nah, not just a thumb)...

Where are those kids from Destroyer Film?

What's next for Davalos? The guy can still win 250 SX races but who's gonna sign him?

I thought Cole Thompson and Kaven Benoit were in California a few days ago for a photoshoot with JSR. They were at the big KTM facility with Decoster... Would have been nice of them to let them use the bikes a few more days so they could race Hangtown and Glen Helen... Oh well, I guess we'll see what they can do against Leok overseas at the MXDN... of wait. that's not happening either.

It was weird/funny to hear Georgia talk about El Hombre's mustache on the podium after both motos... Who doesn't like her?

Why am I wasting so much time on this stupid 'pro' sport?

Phil Nicoletti and Josh Grant are dumb... I think so...

Bogle's career can only go downhill....

If Metcalfe and Facciotti can stay healthy it could be one heck of a season up here...